It’s a special kind of building that tries to be at one with nature, having minimal impact on the land while blurring the distinction between interior and exterior. To turn that kind of architecture into a home in a heavily wooded area where the climate can shift from dramatic heat to below freezing—and where insects and wild boar abound—takes a particularly intrepid client.

In recent years, a heightened interest in ecotourism has given rise to many remarkable built works that go deep into the forest and offer an intimate relationship with the surroundings. In northern Sweden, Tham & Videgård Arkitekter suspended a suite for the Tree Hotel midair around a tree trunk. Portuguese architects Diogo Aguiar and Luís Rebelo de Andrade created an eco-resort out of a series of huts on stilts nestled around trees. But these were intended for what oftentimes turns out to be a single, short visit. Imagine frequent visits and occasional long stays within such structures. That’s the scenario Berkeley-based Envelope Architecture + Design created in a weekend and holiday retreat for a couple and their three young children. 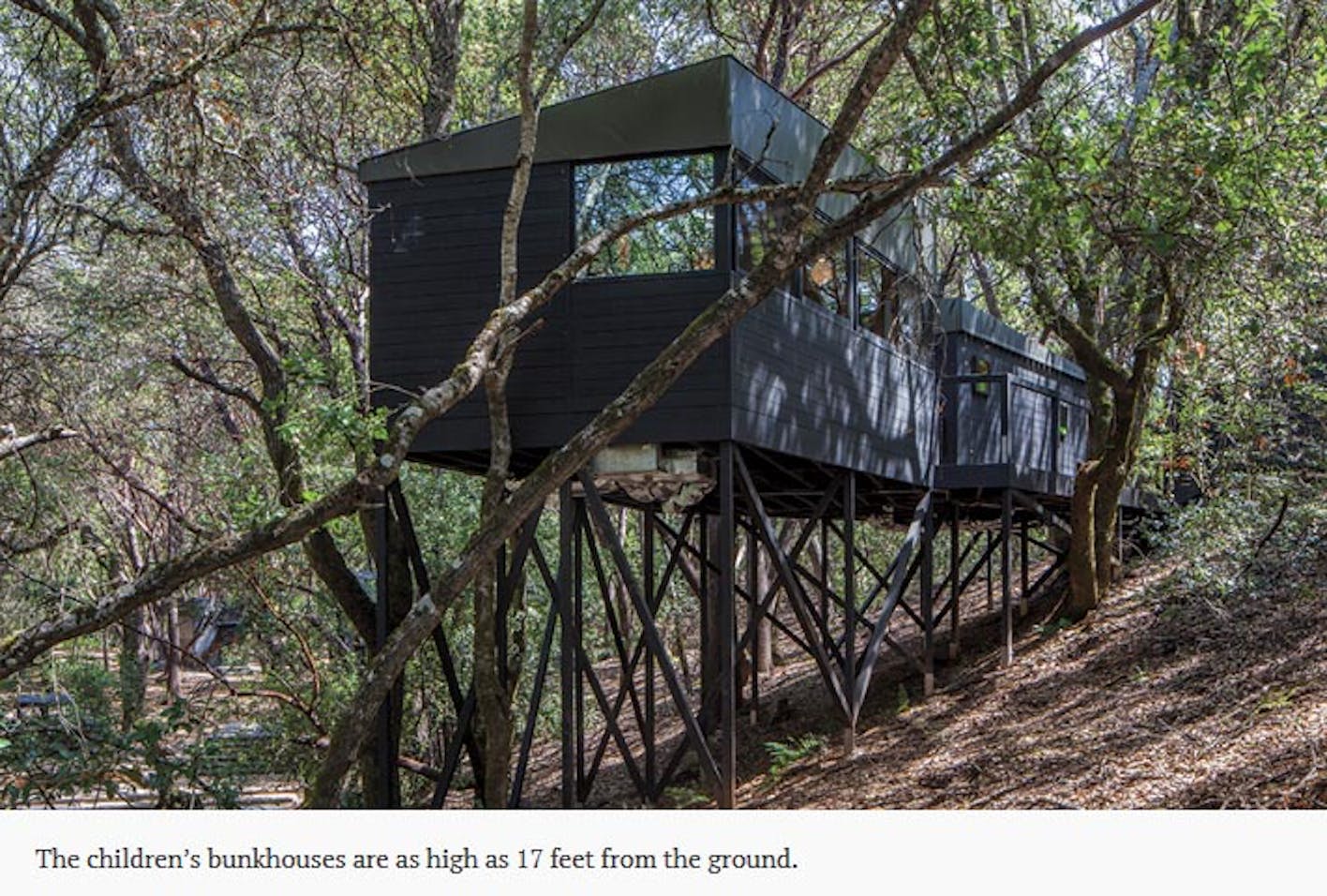 This wasn’t the first time Envelope A+D principal and founder Douglas Burnham worked with the family, having previously renovated their primary residence. A level of trust had already been well established, but, still, a sense of adventure was necessary to see this project through.

It began, somewhat like an experiment, with what is now the guest suite. That was the first of nine tent cabins within four clusters—each fully serviced with plumbing and electricity. The cabins are spread out over two acres around a central plaza—a cleared area by the main pavilion, paved with concrete—within a much larger hilltop property that is accessed by a narrow, winding gravel road beyond the picturesque vineyards of Mendocino County in Northern California. 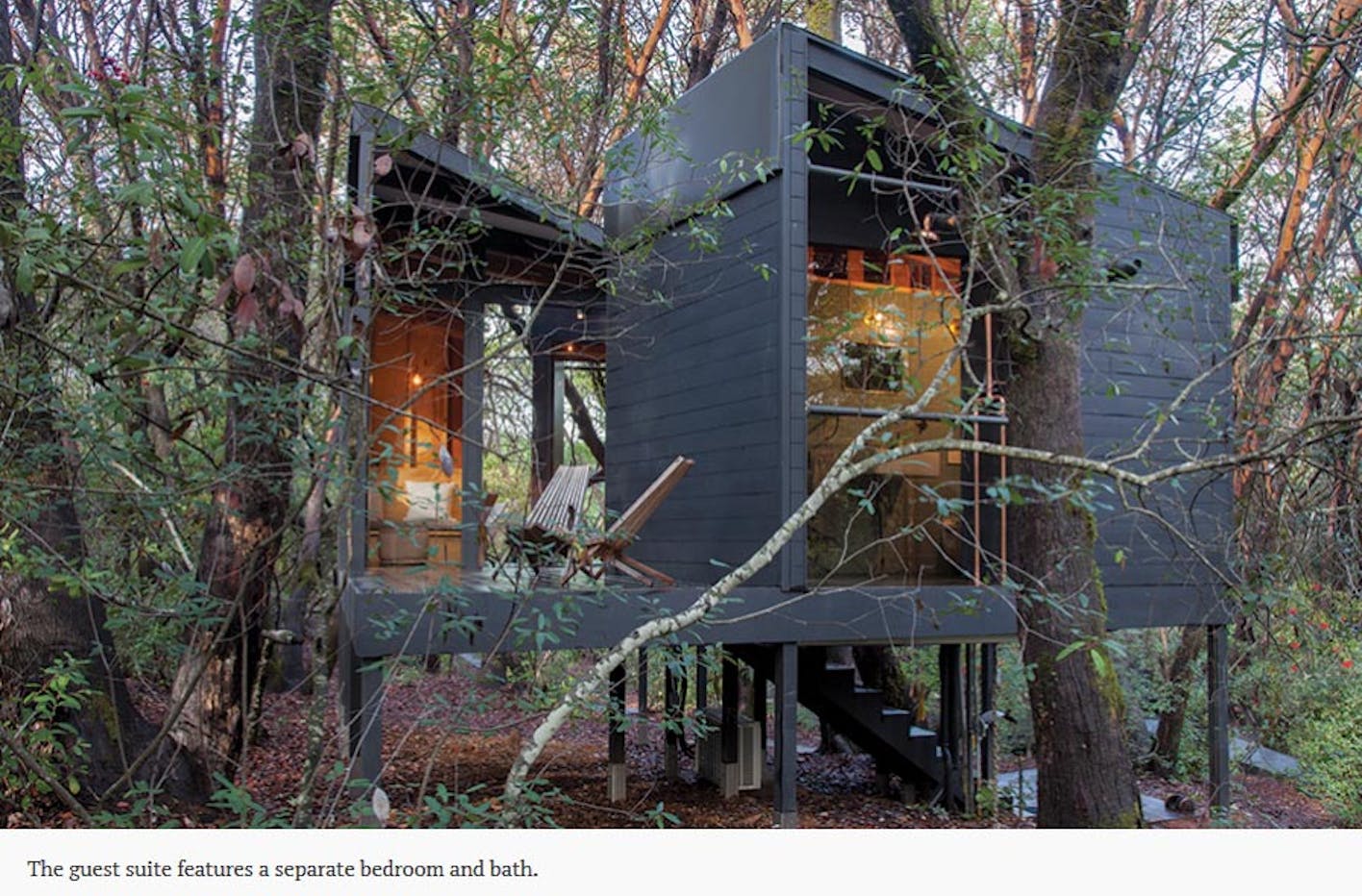 Raised several feet off the ground on 4x4 posts, the cedar-clad bedroom and detached bath introduced ideas that would be amplified in future structures erected over the course of a continuous two-year building process. “The design evolved with time,” Burnham says. “We call it cocreating by iterating.”

In order to keep as many of the scraggly manzanitas, madrones, and California live oaks as possible, the guest suite’s L-shaped plan weaves among the slender, slow-growing trees. (The geometries of later, larger cabins would become increasingly intricate.) Its sloping roof consists merely of two layers of treated Army green canvas supported by rafters and tied down by what Burnham calls “an expressive trusswork” of nylon rope, the kind used by rock climbers. But more than the construction itself, it is the interplay of indoor and outdoor, public and private, real and perceived that elevates the experience of these hybrid shelters to something beyond glamorous camping.

From the bedroom of the guest suite, for instance, you proceed outside to the deck, then reenter the covered space of the bathroom, only to pass again to the outdoors where, through the use of subtly tinted glass and two-way mirrors, a shower feels both intimate and exposed at the same time, challenging your discernment of enclosure, personal space, and even temperature.

Some variation of this experience—influenced by the mirrored-glass pavilions of artist Dan Graham—is repeated in the en suite bathrooms for the children’s and master cabins. (A detached structure called the outhouse serves the communal cabin containing the kitchen, living, and dining areas, and a completely open outdoor shower is located out of view from the cabins.) The chromatic immersions of artists James Turrell and Carlos Cruz Diez inspired the range of saturated colors in the individual bunks, built at various heights within the walls, where the children and their friends sleep. Located on the opposite side of the plaza from the master cabin and elevated as high as 17 feet from the sloping ground beneath (it is supported by additional 4x4 bracing), the children’s cabin is fairly autonomous. 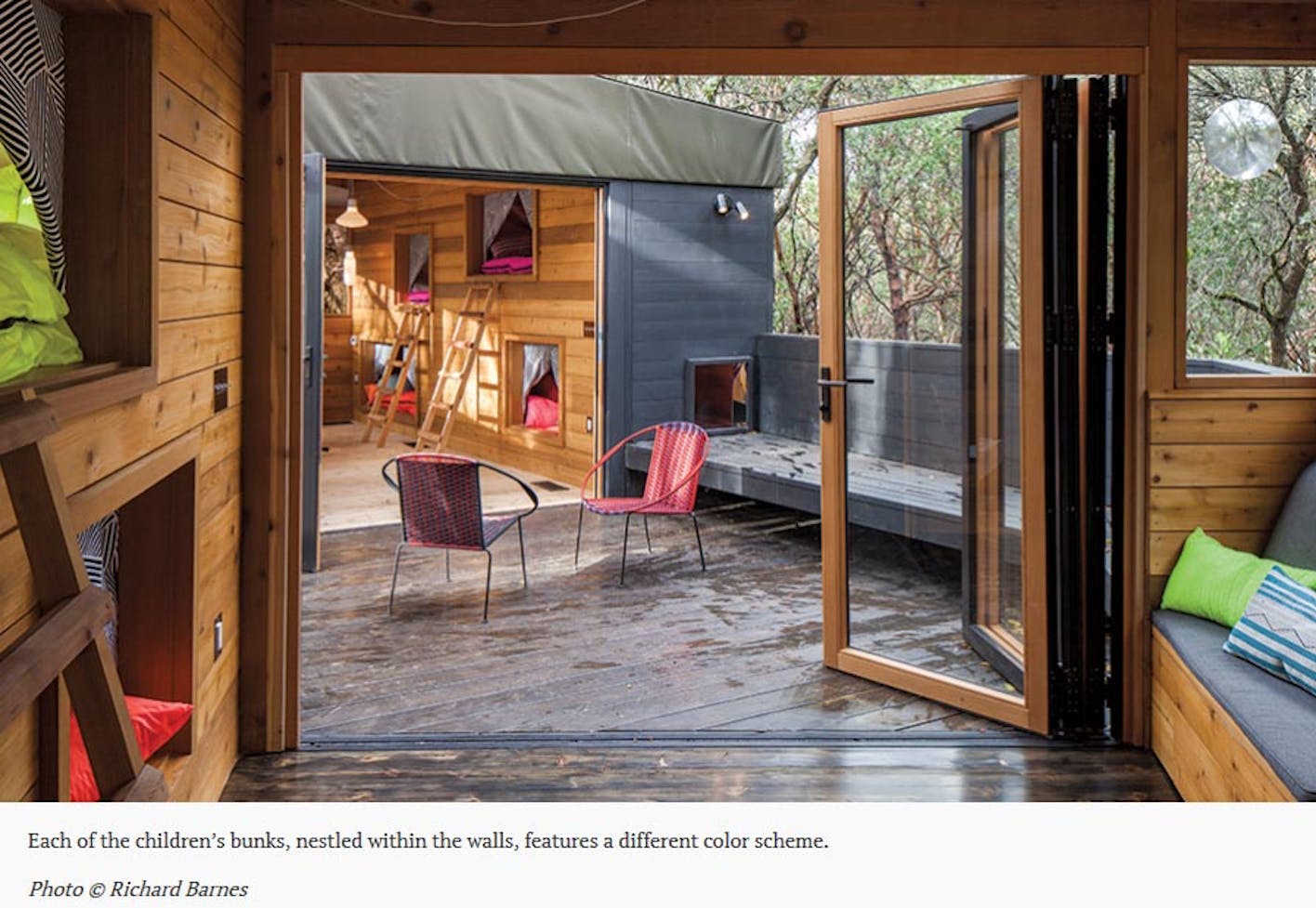 In fact, each of the cabins is independent— “individual chambers of experience,” according to Burnham—joined by a ramping walkway and steps of 3-inch-thick planks of sustainably harvested redwood. “It was a question of, How do you pull out of the land the idea of isolation and connectivity?” recalls the architect, who initiated the project by walking the site and marking with string the shapes and locations of the cabins.

While larger conceptual issues permeated the design process—including expanding the narrow band of what we perceive comfort to be—there were also practical matters to address. Though originally designed without cooling, small air conditioning units intended for use in mobile homes were added, their ductwork visible on the underside of the uninsulated cabins. Fireplaces heat some of the cabins. Early on, a fallen branch damaged one of the canvas roofs, requiring replacement. The wood path serves an additional purpose—making rattlesnakes more visible. (One of its boards can be lifted into a vertical position to prevent a wild boar from climbing into the main cabin.) And, while the architects dealt with physical notions of isolation and connectivity, from a virtual perspective, the site has full access to WiFi, which, by today’s standard, is the ultimate necessity.