A Flexible and Expansive Design Pays Off During the Pandemic

A Santa Monica restaurant’s choice of NanaWall was uniquely suited for the demands of the global pandemic: expanding fresh air, open space and maximizing their floor space in the wake of COVID-19 shutdowns. 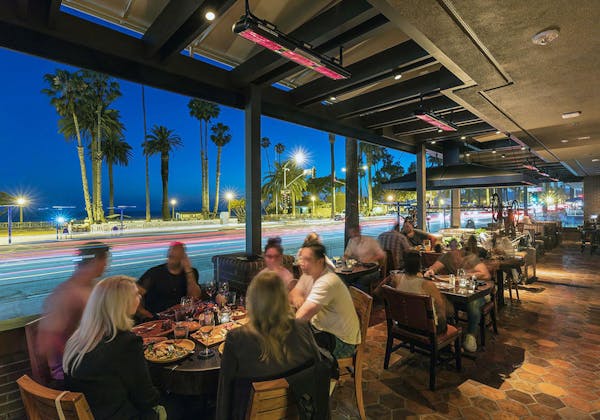 When he began the project, Hatch Group principal Todd Hatch felt that the previous restaurant that occupied the location had “turned their back on the ocean and Ocean Avenue.” Determined to undo that mistake, Hatch’s design retained only the kitchen portion of the existing space and gutted the rest of the building.

When King Seafood - a major Southern California restaurateur with over 20 locations from Los Angeles to the Mexican border - decided to develop Santa Monica’s Meat On Ocean they didn’t think about how the restaurant’s design would function during a global pandemic. The team brought in frequent design partner and hospitality design specialist, The Hatch Group to create an innovative and expansive space that would maximize seating options and create a welcoming environment for their patrons – it just happened that those very considerations played an essential role in keeping the restaurant open during the COVID-19 lockdowns.

“We turned our focus once again to Ocean Avenue and the Pacific Ocean,” relates Hatch. “We had to find a way open up that exterior side of the building and include the patio within that opening, so the guests would have a sense of being part of Ocean Avenue as well as the Pacific. You get the sights, sounds and smells of the city and sea, all of that is part of the connection we made.” 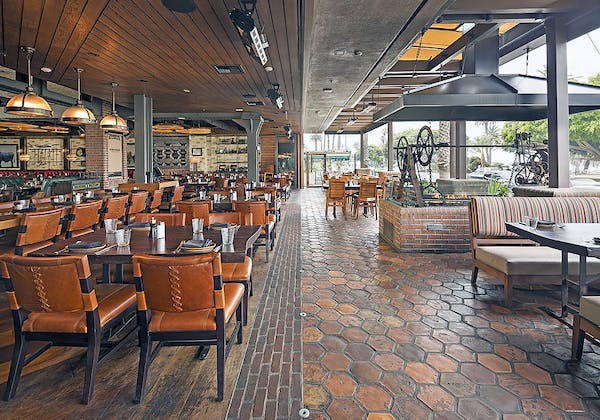 Hatch felt that the best way to maximize this great location was to eliminate any separation between interior and exterior. The solution centered around removing the entire front wall and replacing it with a moveable glass wall NanaWall system. Their choice has proved prescient. 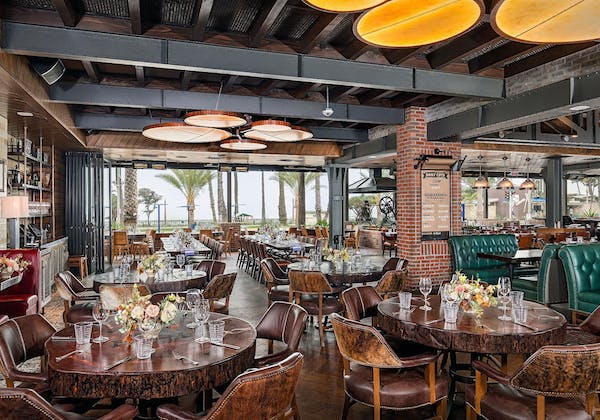 Even when the wall is closed, the narrow frames of the NanaWall HSW system leave the view largely intact. The restaurant floor is about 30 inches above street level, a vantage point that looks over much of the street traffic, and enables ocean views from every seat, with the sunset and the lights of the nearby amusement park pier added in. The open concept is one of the draws of the restaurant and is left open all but a handful of days each year. Even before the Covid-19 pandemic, management estimated that 80% of the customers wanted “to get as close to the ocean as possible.”

Opening the front wall required a means to close it after hours and in bad weather, but on the few days a year when the wall would be closed transparency and views remained paramount. In order to achieve maximum clear space when open, and maximum view when closed, they selected a NanaWall HSW system. The 20 sliding glass panels, each over three feet wide, span roughly 68 feet and include a swing door for patio access. The wall is fully suspended from overhead, with no floor track, allowing a seamless connection from interior dining room to the patio. When closed, the panels latch to the floor through inconspicuous flush sockets.

In their usual open state, the panels are stacked neatly in parking areas to the side, invisible to the restaurant and leaving the front view completely unobstructed.

How the Design Allowed the Restaurant to Get Through the Pandemic

After the initial pandemic closure, restaurants were allowed to open in Santa Monica for outdoor dining only. Meat On Ocean was only able to serve patrons on the patio. Fortunately, the open concept restaurant design and large moveable glass wall accommodates a second line of tables, straddling the path of the glass panels, that are far enough from the first line for social distancing requirements. All the tables are now separated by plexiglass dividers, too. This arrangement allowed them to get a permit for 24 tables, a drastic reduction from the full dining room, but still enough to operate a restaurant.

Moreover, it has been accepted as safe by patrons: attendance has been good, and the management has had to limit diners to 90 minutes. The second line of tables accounts for about 35%-40% of their business under pandemic conditions.

“I think the concern in Covid-19 is the amount of airflow,” says general manager Dominic Brenn.“To increase the airflow in your restaurant, to extend the whole patio, but still be able to lock up at night, I think NanaWall systems are your best bet. I’m very thankful for the layout here and for the increased ability to serve our customers.” 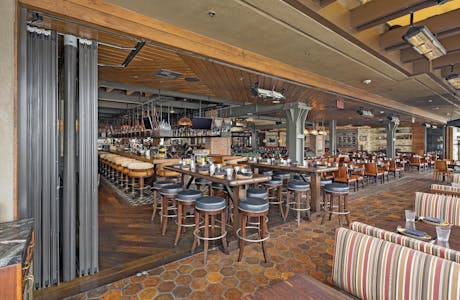 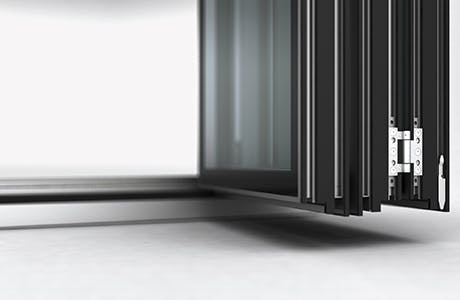