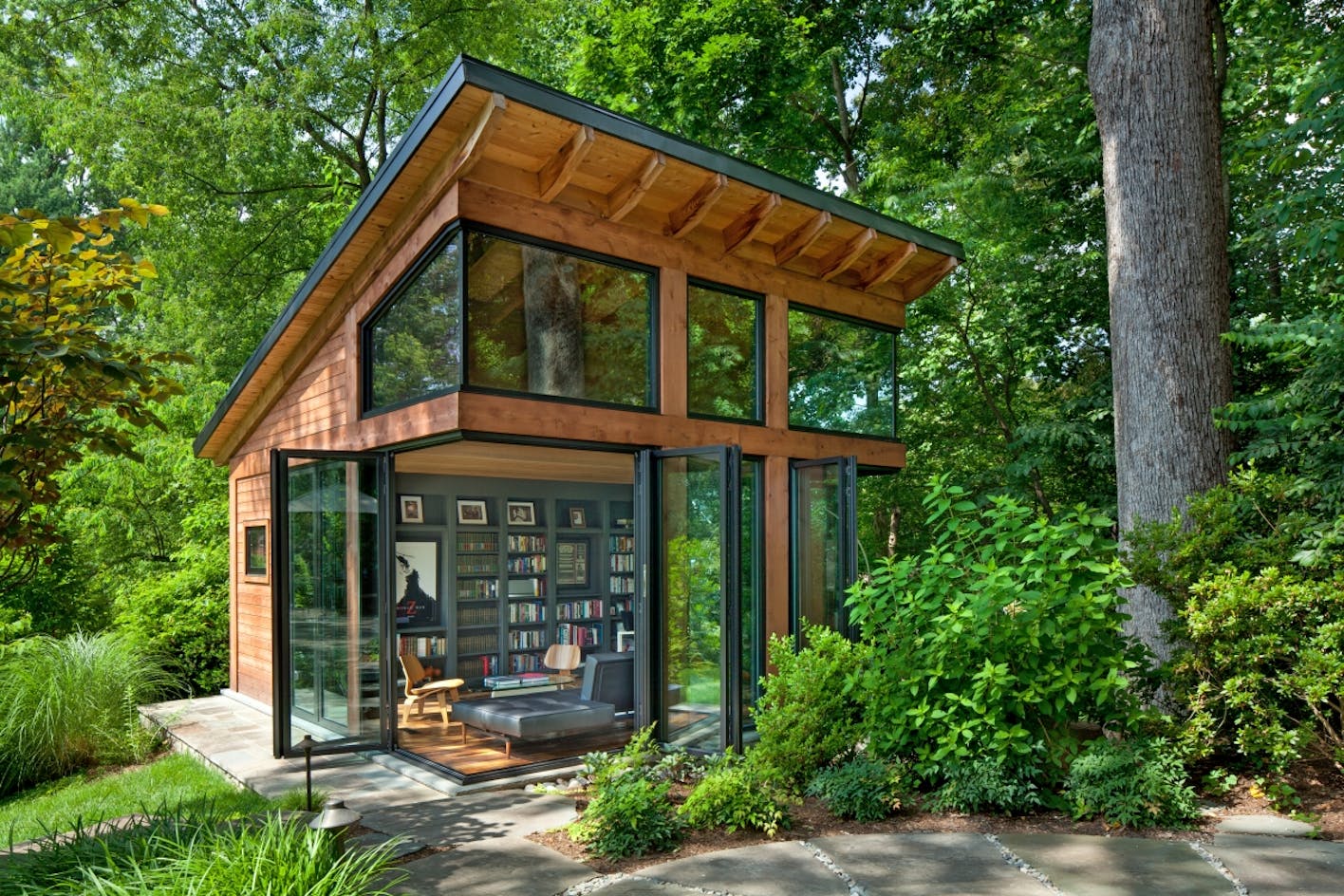 When an Arlington-based screenwriter commissioned the backyard office of his dreams, no one had any idea how wide the impact of the project—a 400 sq. ft. Accessory Dwelling Unit—would be. The office, completed in 2017, was profiled in ARCHITECT and Home & Design, and that appeared to be the end of it. And then in 2020, DWELL rediscovered the project just as COVID was forcing people to contemplate how they wanted to work from home. From there it took off - it has been shared, tweeted, and Instagrammed thousands of times and it hasn’t slowed down. We wanted to talk to the architect who designed it, Bulent Baydar, of Harrison Design, about how he designed the ultimate backyard office and what he thinks of the unprecedented reaction to it.

NANAWALL: Can you tell us a bit about the project and how it came about?

BULENT BAYDAR: The guy that owns the dwelling is a screenwriter who’s done a lot of movies and a bunch of different projects for HBO and Netflix.  We were originally going to design a new house for him and his wife; but for professional and personal reasons they didn’t have time to deal with building a house, so they stuck with their very traditional house in Arlington, Virginia. He had a basement office, but it wasn't separated enough for him to write and think. So, he asked us if we could design something outside in the backyard where he could completely remove himself to. He wanted something super modern, but we tried to make the design work with the existing house. We placed the accessory dwelling unit in the back corner of the lot, amongst the trees yet it was close enough that you could easily go to the house. But it's enough removed that it worked. 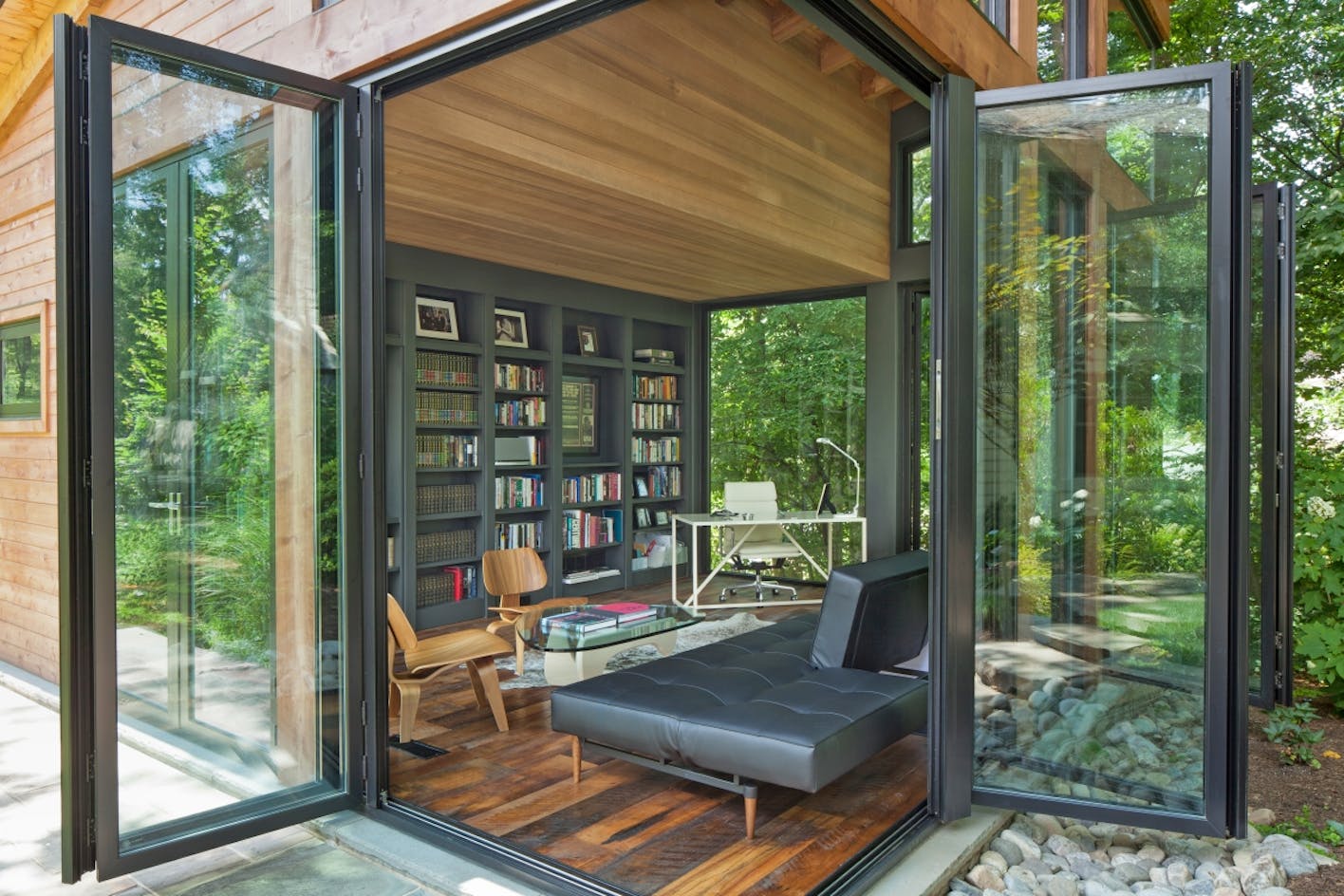 NANAWALL: How did you decide to incorporate NanaWall folding glass walls into the Accessory Dwelling Unit design? The use of the open corner doors is really unique – it maximizes the sense that the unit is part of the outdoors.

BAYDAR: NanaWall came into play from the beginning as he really liked the idea of bringing the outdoors in and being able to open up the doors for maximum immersion into the surrounding grounds. Even though he’s in Virginia, not California, and it’s not possible to open up the folding glass walls all the time, he still liked the idea of being able to. That's when I started thinking of using the NanaWall corner doors that open. The open corner design made the space feel like it is floating; the open sides and corners and the use of all that glass created a very open structure. It provided that feeling of bringing the outside in, which is exactly the type of environment my client likes to work in. 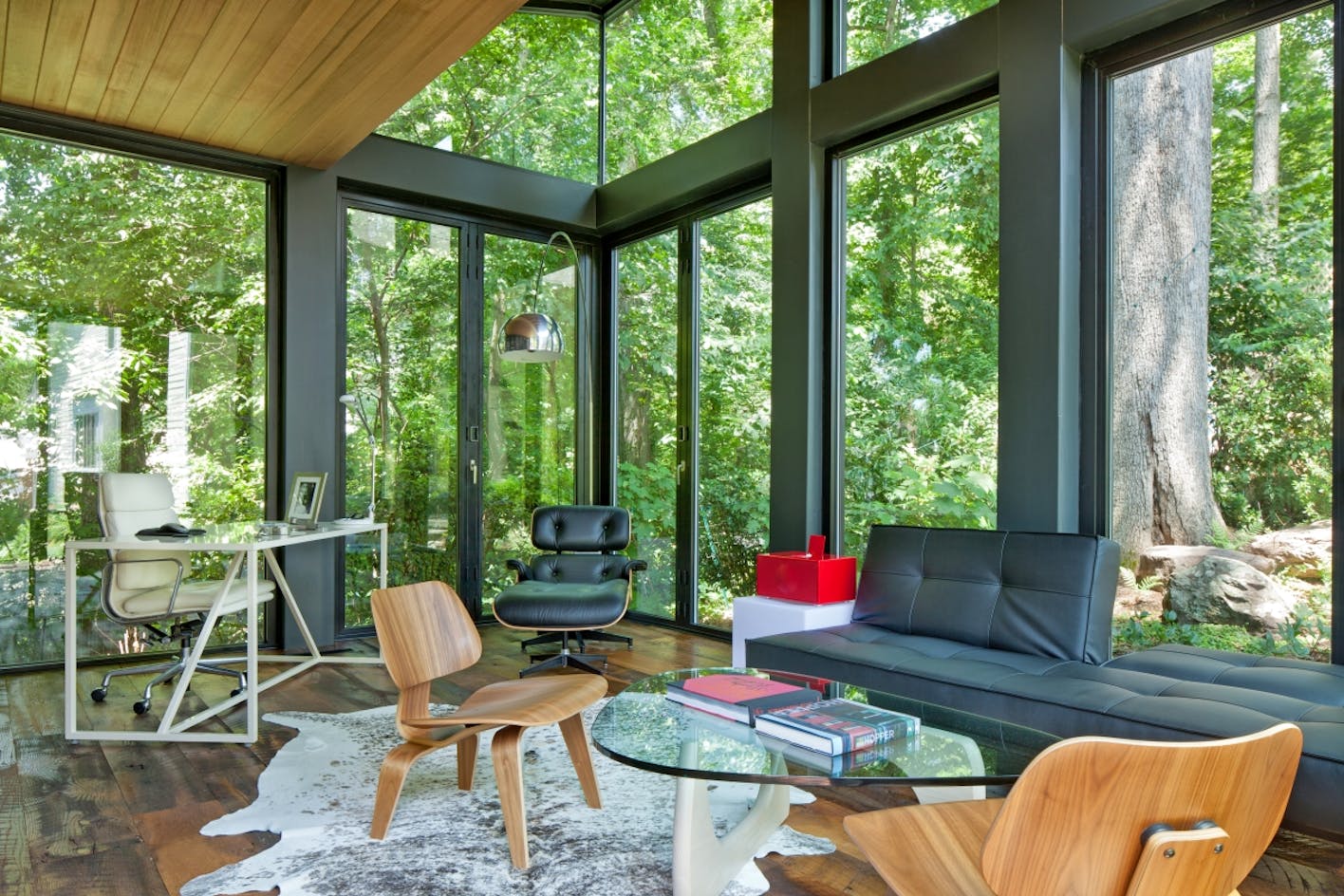 NANAWALL: How did it get so much media and social media attention? It seems like it’s really ramped up in the past year.

BAYDAR: It's interesting because it did get published right after it was built by a magazine called Home & Design locally in the mid-Atlantic region. So, it got a little bit of attention then, but nothing like it has the last couple of years.  Last year DWELL picked it up and published it twice, and it just got a lot more traction after that. Then on Instagram, it started getting reposted suddenly. It's been on Instagram sites that have over a million followers, these kinds of tiny house sites, ADU sites, modern health sites, and different types like that. I've been tagged probably a hundred times by publications that have reposted it on Instagram and other sites. It has been crazy.

NANAWALL: Do you get clients coming in and asking you to create the same design – either as an office or an Accessory Dwelling Unit?

BAYDAR: We've been bombarded with people that were interested in that - you'd be amazed how many. I just had another person reach out yesterday who wants to do two very similar types of projects. This was a custom design for the homeowner and so it's not something we just resell as a set of plans, but I tell everybody, we can take the principles and customize it to whatever you want to do. We've done a couple of accessory dwelling units since then - one was just a purely outdoor pavilion, and then another was a little bit larger version of this.

NANAWALL: Why do you think the project has become so popular?  Is it the rise of work from home that took place during COVID or just a general rising interest in Accessory Dwelling Units?

BAYDAR:  I think that's what really vaulted it more than anything else. We’re seeing a lot of requests now from people who want home offices and outdoor spaces—that's part of the reason why the timing was so perfect. This is literally the smallest and simplest structure I'll probably ever work on, but for whatever reason, it has just resonated with people.

NANAWALL: Does the homeowner open the NanaWall system a lot?  How did it end up being used?

BAYDAR: Oh, he uses the NanaWall folding doors all the time.  Even if the weather is not perfect, he opens the system up because he just likes the feeling of fresh air and breezes and the connection to nature. So, it's worked out well for my client. He loves it and uses it all the time. I think it's been mentioned in an article that it's also used as a kind of a party pavilion as well when they have outdoor deck parties. The homeowners open up the space, turn on the music, and the way the dwelling is lit up, the ADU just draws people to it. People love it. 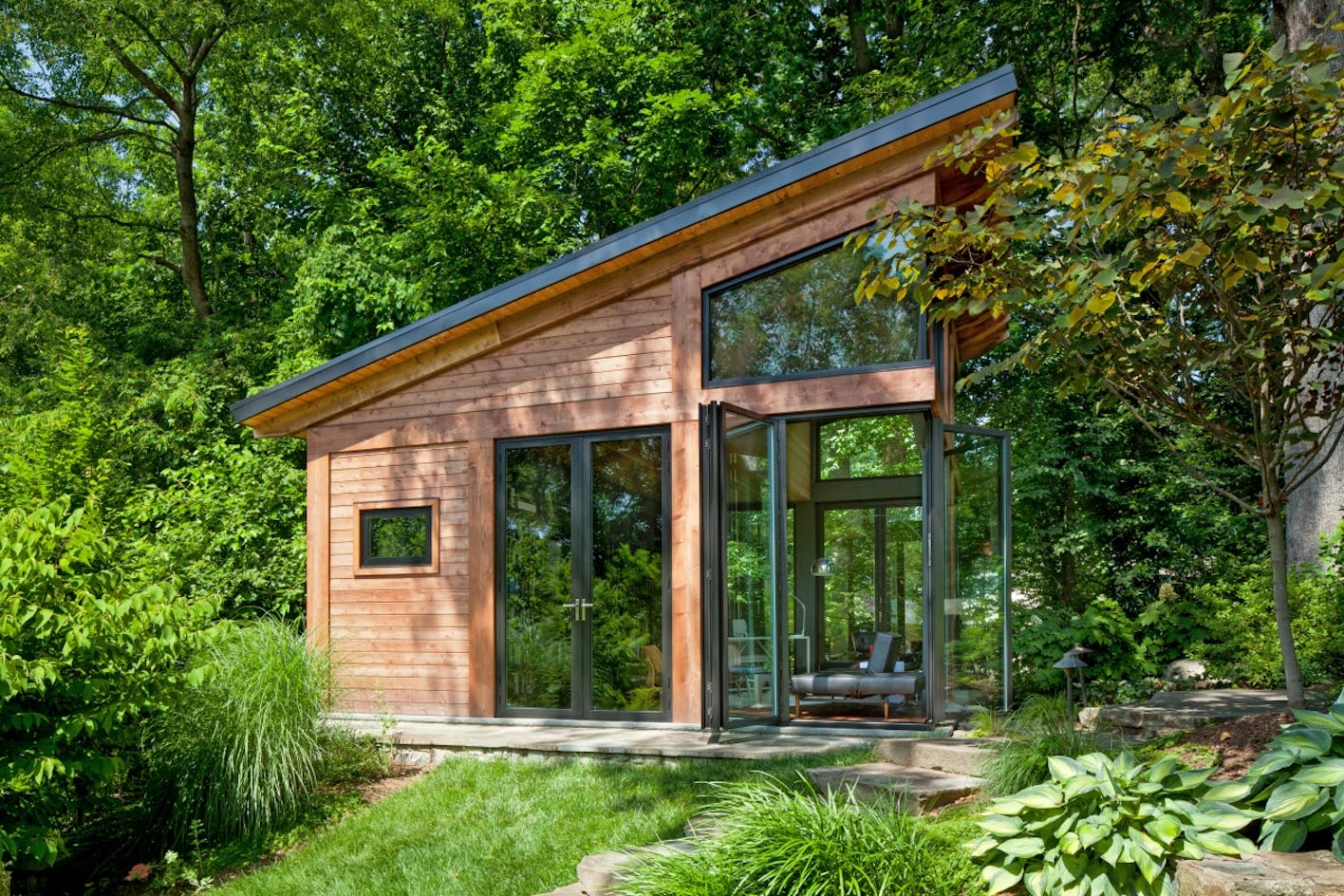 NANAWALL: How does the owner feel about all the publicity and attention His studio has been getting? It could practically have its own #hashtag on Instagram!

BAYDAR: The first time we published it, he said publish whatever you want but don't use my name. Then, later on, he changed his mind. He's realized everybody knows about this thing at this point, it really doesn't matter. And you know, it's funny because I'm doing another screenwriter’s house right now and he knew of Matt Carnahan’s studio, and he loves the project. He said every screenwriter dreams of having Matt’s accessory dwelling unit/studio.

Considering building your own Accessory Dwelling Unit (ADU)? You’re part of a trend. A combination of rising home prices and changes to existing legislation has left lots of homeowners looking for ways to enhance their property, and ADUs are a wonderful answer. More than 70,000 properties sold in 2019 had ADUs attached, and a recent Freddie Mac study showed ADU construction has grown by an average of 8.6% per year over the past decade.  Whether they are named granny flats, in-law units, ADUs, Airbnb units, or backyard cottages, accessory dwelling units offer outstanding flexibility to enhance your home. Check out more inspiration here.