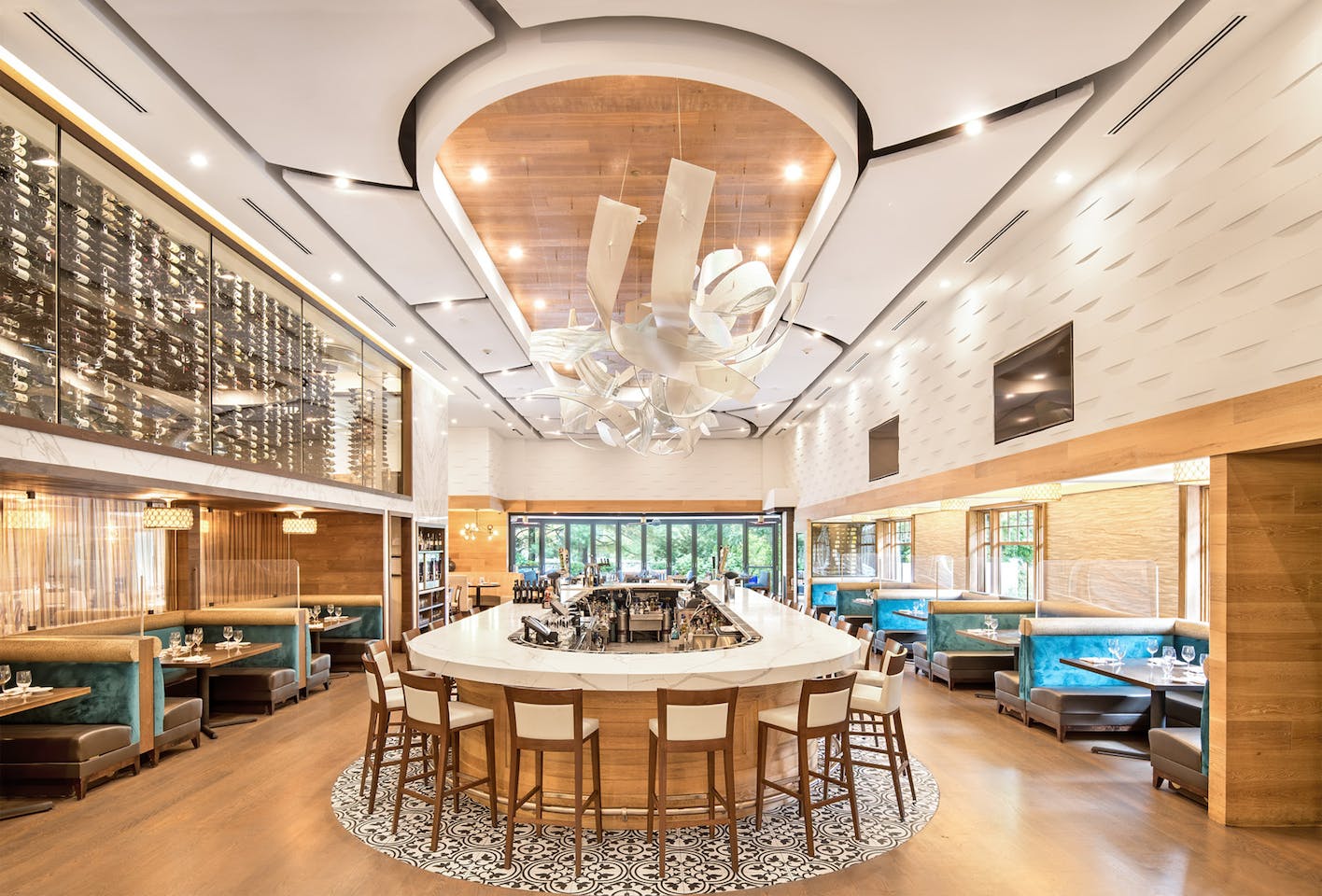 Scotto Brothers Restaurants have designed their six locales around the concept of moveable glass systems and their latest restaurant, Opus Steakhouse in Jericho, New York, is no exception. Its co-owner, Arthur Viana, is an outdoor dining enthusiast whose ambition was to incorporate the outdoors in the design as much as possible. He conceived a restaurant in layers with five NanaWall single track sliding glass walls to create maximum openness and allow maximum flexibility when operating the restaurant.

A relatively large restaurant, Opus Steakhouse seats up to 565 people in an opulent modern setting. In 1789, the site was a farmhouse that was later owned by Valentine Hicks, second president of the Long Island Railroad and abolitionist who used his house as a waystation on the Underground Railroad. The building then became a restaurant, The Maine Maid Inn, around 1950 but was shuttered in 2008 and fell into disrepair. The exterior façade is a protected landmark that was preserved and restored during the construction of Opus Steakhouse, but the non-historic interiors were effectively rebuilt from the ground up. 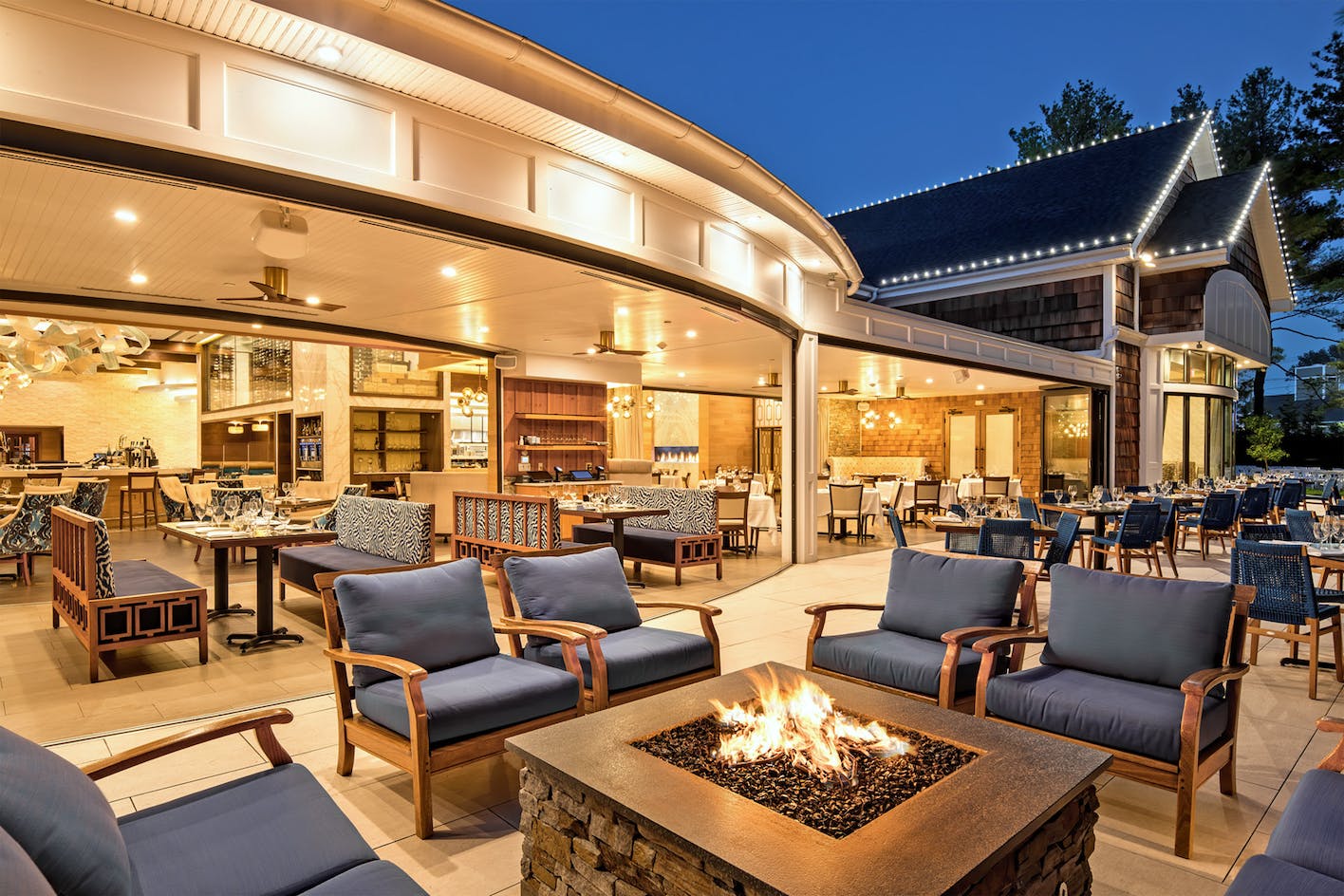 A Multifunctional Space for all Occasion

The building is compartmentalized into three main sections. The western side hosts a large bar room, with a covered patio area adjacent to it. In the center is a mozzarella bar followed by the main dining room and extended into the covered patio for outdoor seating. The east is a large dining room that can be separated into two for private functions. The exterior rear façade is made up of three moveable glass systems, over ten feet tall, that easily open into the broad, open-air patio. Beyond that, a narrow strip of garden landscaping creates an illusion of the verdant countryside. 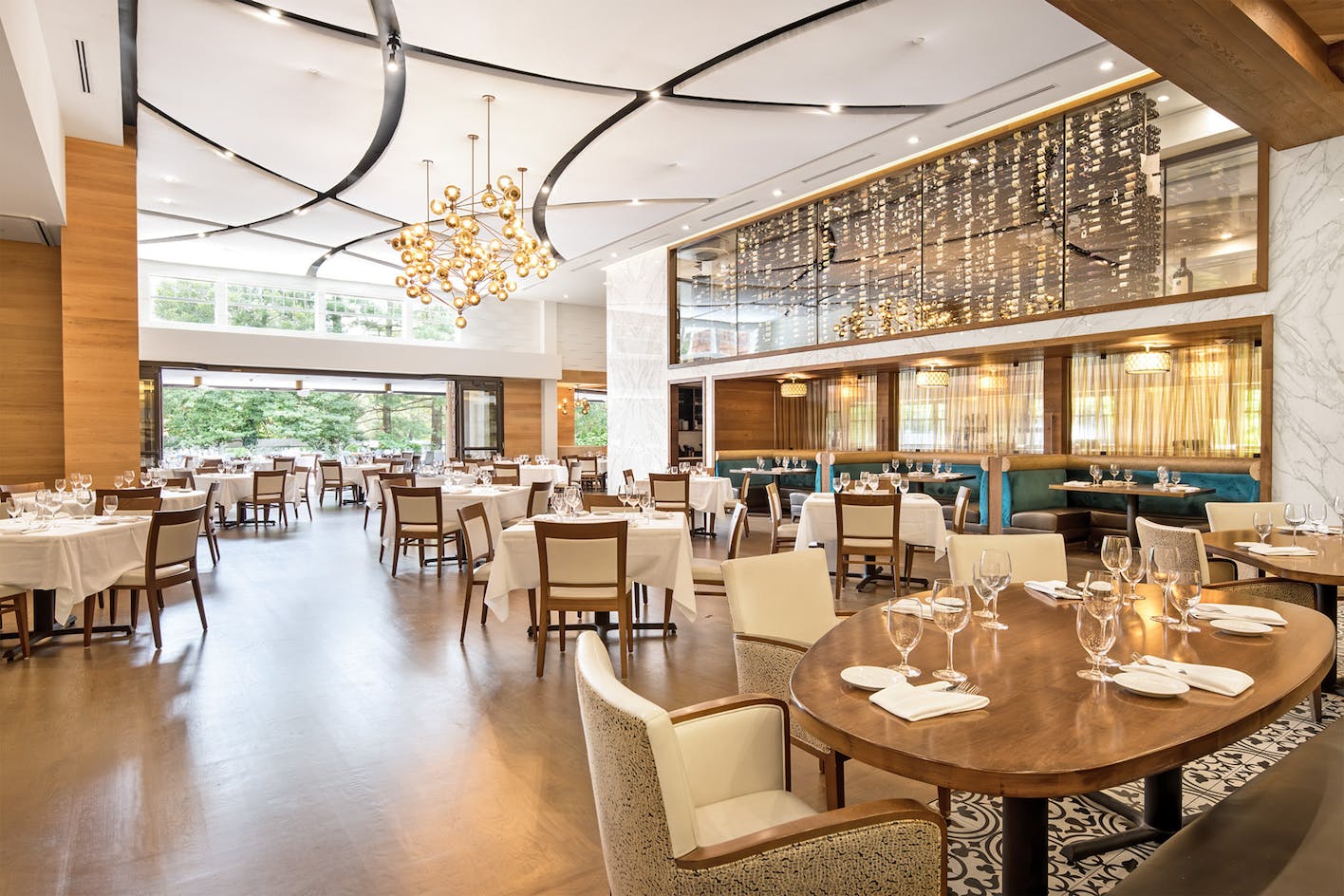 A Homage to Femininity

Both the curvilinear lines and the sense of openness are pervasive. The west bar room opens completely to the covered patio with a curved sliding glass wall that parallels the exterior curved system adjacent to the outdoor patio, creating an unbroken connection between the outdoors and the bar. Both systems are NanaWall HSW60 single track sliding glass walls, configured as segmented curves, with flat panels traveling in a curving track.  The outer wall’s curvature is deep enough to hold two extra tables-for-two within it. The main dining room has a similar arrangement with inner and outer NanaWall HSW systems in linear rather than curved configurations. 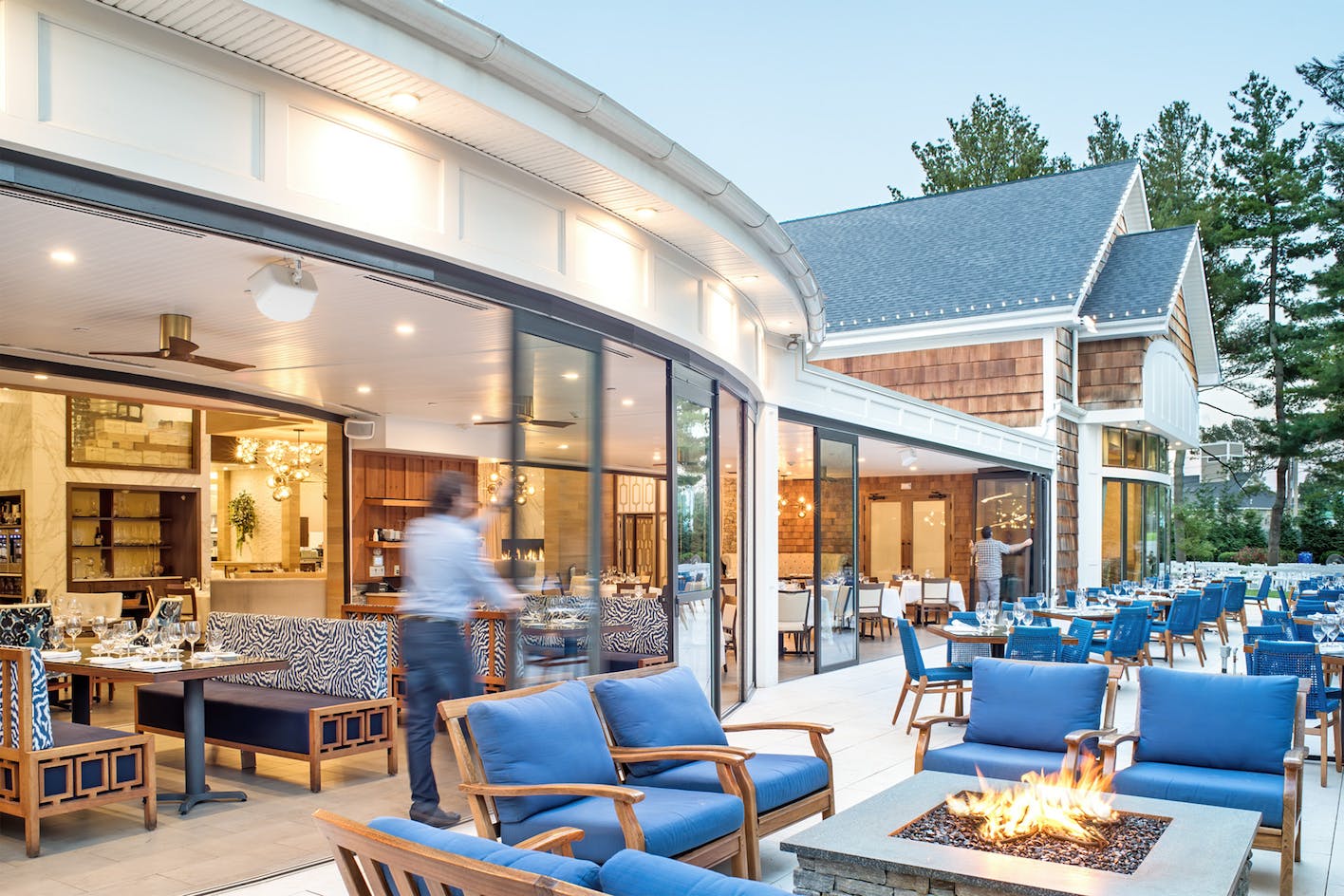 All four top-hung HSW60 individual panel single track sliding glass walls, straight and curved, are specified with two swing panels—conventionally swinging doors within the run of the moveable glass systems—complete with panic hardware. When the wall is opened, the swing doors slide away with the rest of the panels, all moving so precisely one track that dining tables can be placed right next to the glass and not be disturbed when the system slides by. The individually moving panels stack remotely in specified hidden parking bays, leaving the entire wall opening completely unobstructed. 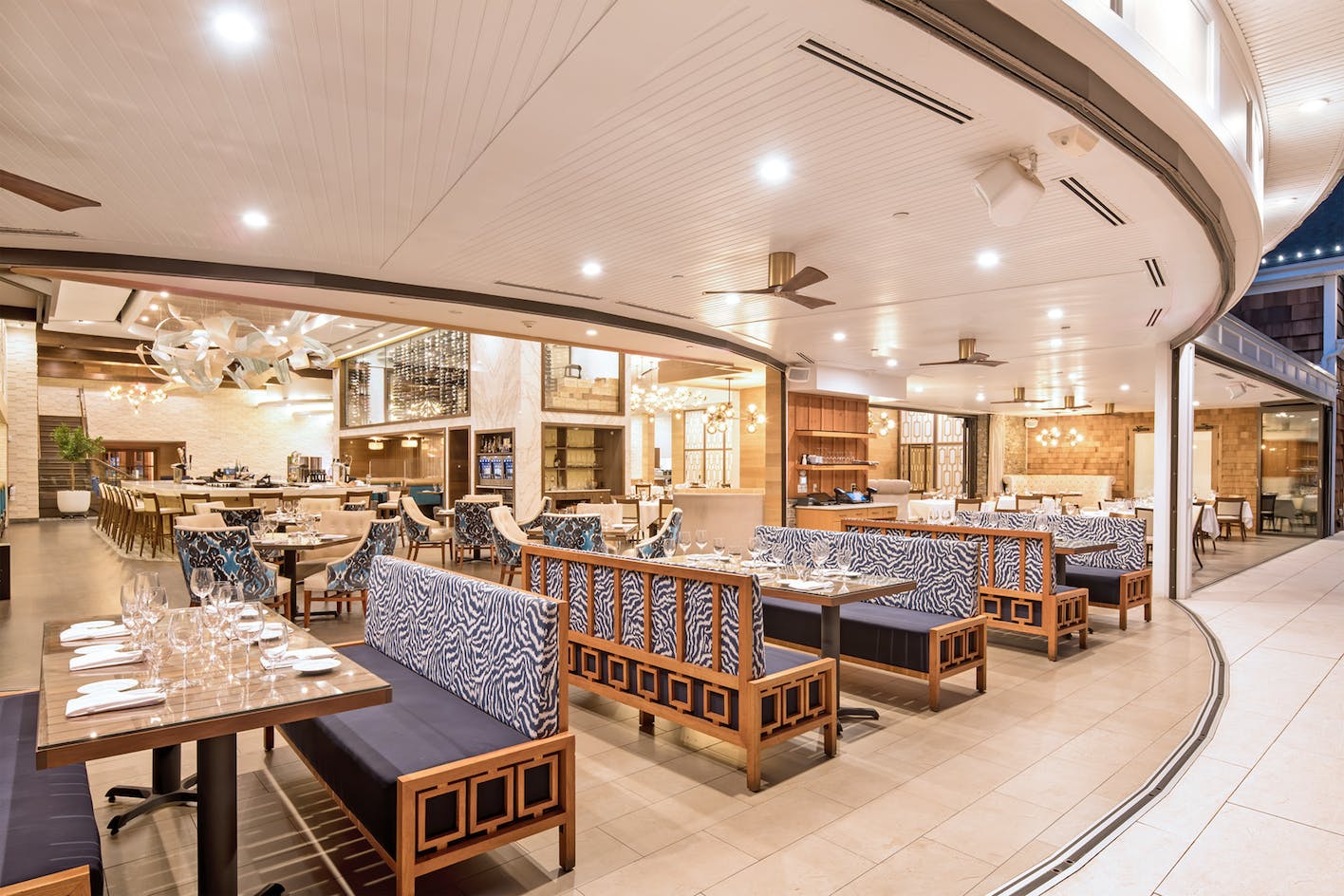 The double skin effect facilitated by the moveable glass systems offers restaurant management greater flexibility. The indoor/outdoor patio spaces can be separated to create private rooms or joined to the main serving spaces. They can be opened to the outside or closed against inclement weather while still keeping a visual connection to the garden. The private function dining room opens completely to the back patio via another curved system, this one, however, with folding rather than sliding panels. The NanaWall SL70 narrow-framed aluminum folding glass wall is also more than ten-feet-tall and includes a swing panel for versatility and easy egress. When opened, the panels stack closely at the side. 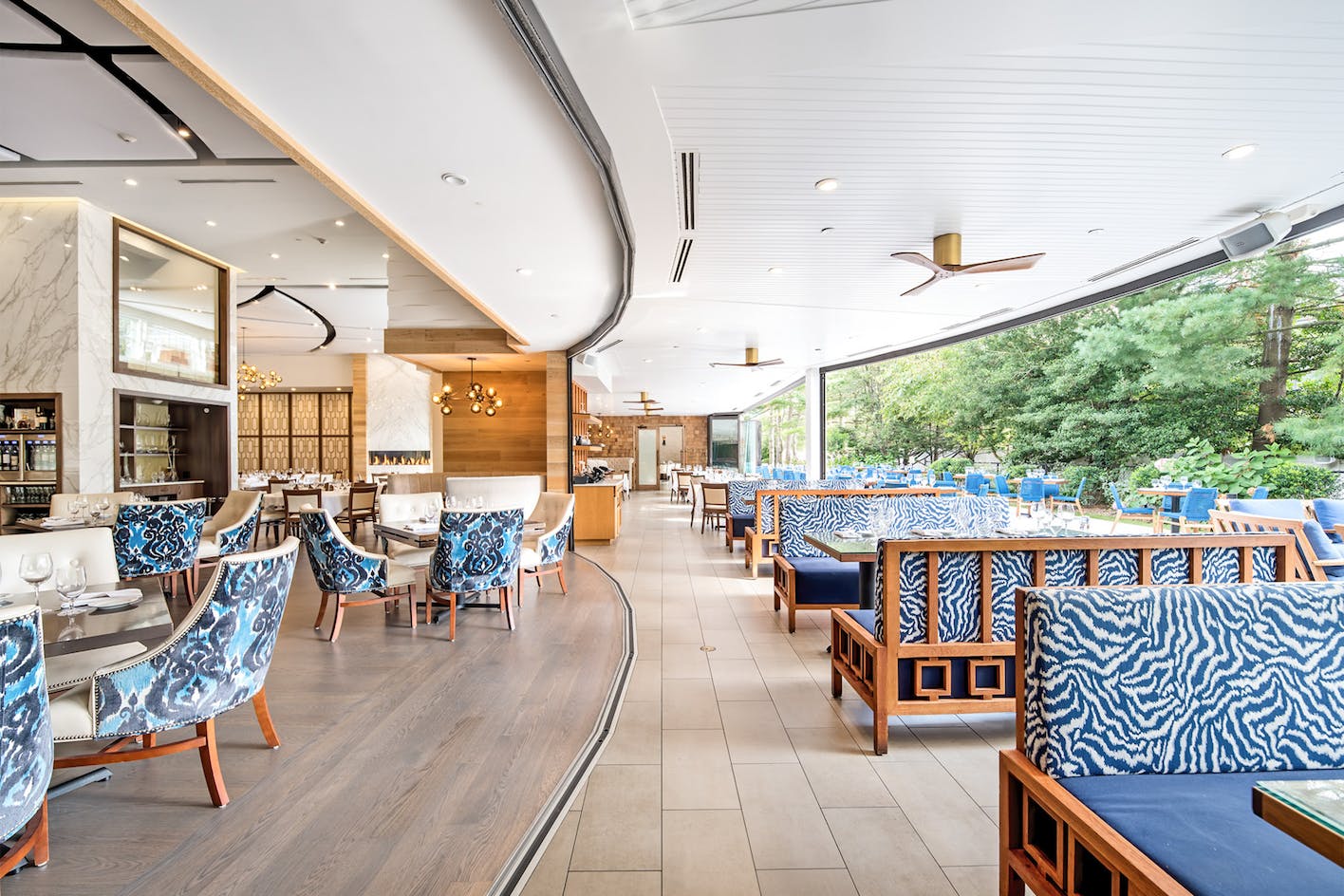 Viana selected the NanaWall aluminum framed folding glass walls in part because of their insulating properties and weather resistance. The floor supported NanaWall SL70 offers heavy-duty performance in every environment and just like the HSW60 it has been independently tested for air, water, structural, operation, and forced entry with excellent results. For the sake of maximum sky views, there is no overhang behind the building, so rain and snow fall right next to the thermally efficient glass wall. “With NanaWall, I don’t have to worry about storm resistance,” he explains. “I don’t have to worry about wind coming through or rain coming in across the floor.” 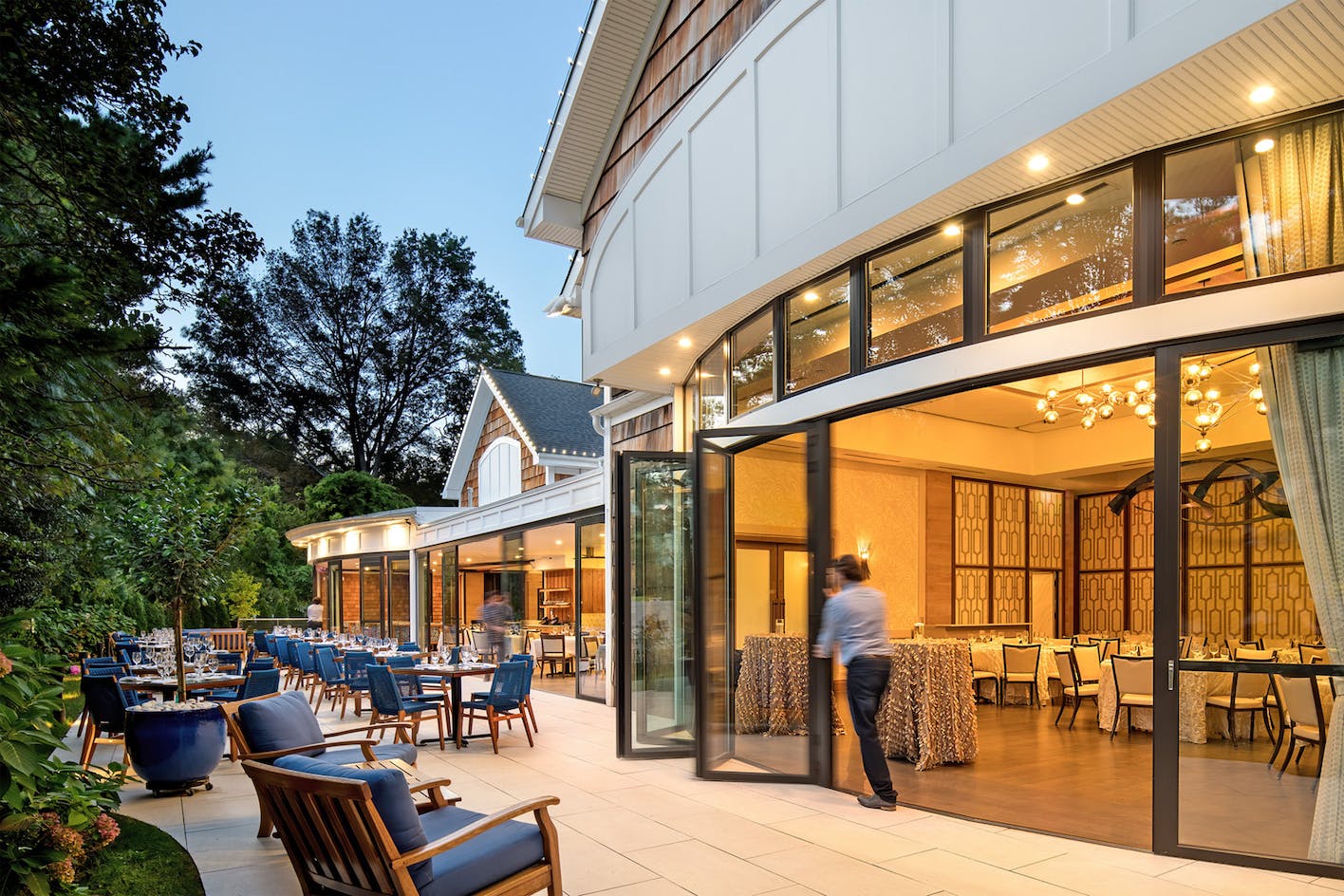 Resilience In Time of Crisis

During Covid-19 pandemic restrictions, the ability to open the walls of Opus Steakhouse proved to be the business’ salvation. Restaurants were allowed no more than 50% of their normal capacity and had to place barriers between tables or else space them at least six feet apart. Viana opted for six-foot spacing. The NanaWall moveable glass systems were kept fully opened while large tents were assembled over the open patio, directly abutting the building. According to Viena, during the peak of Covid, everyone wanted to be outside, and so they brought the outside in.

“We made the space in the tent feel like it was part of the restaurant with the NanaWall systems instead of having our customers walking out through a tiny little door,” explains Viana. “We were able to get additional seating and even when seating under the tent, patrons were still offered a genuine restaurant experience.” Opus Steakhouse did booming business through those difficult months, a testament to the design’s open wall strategy and the flexibility of a highly flexible, long-lasting solution.