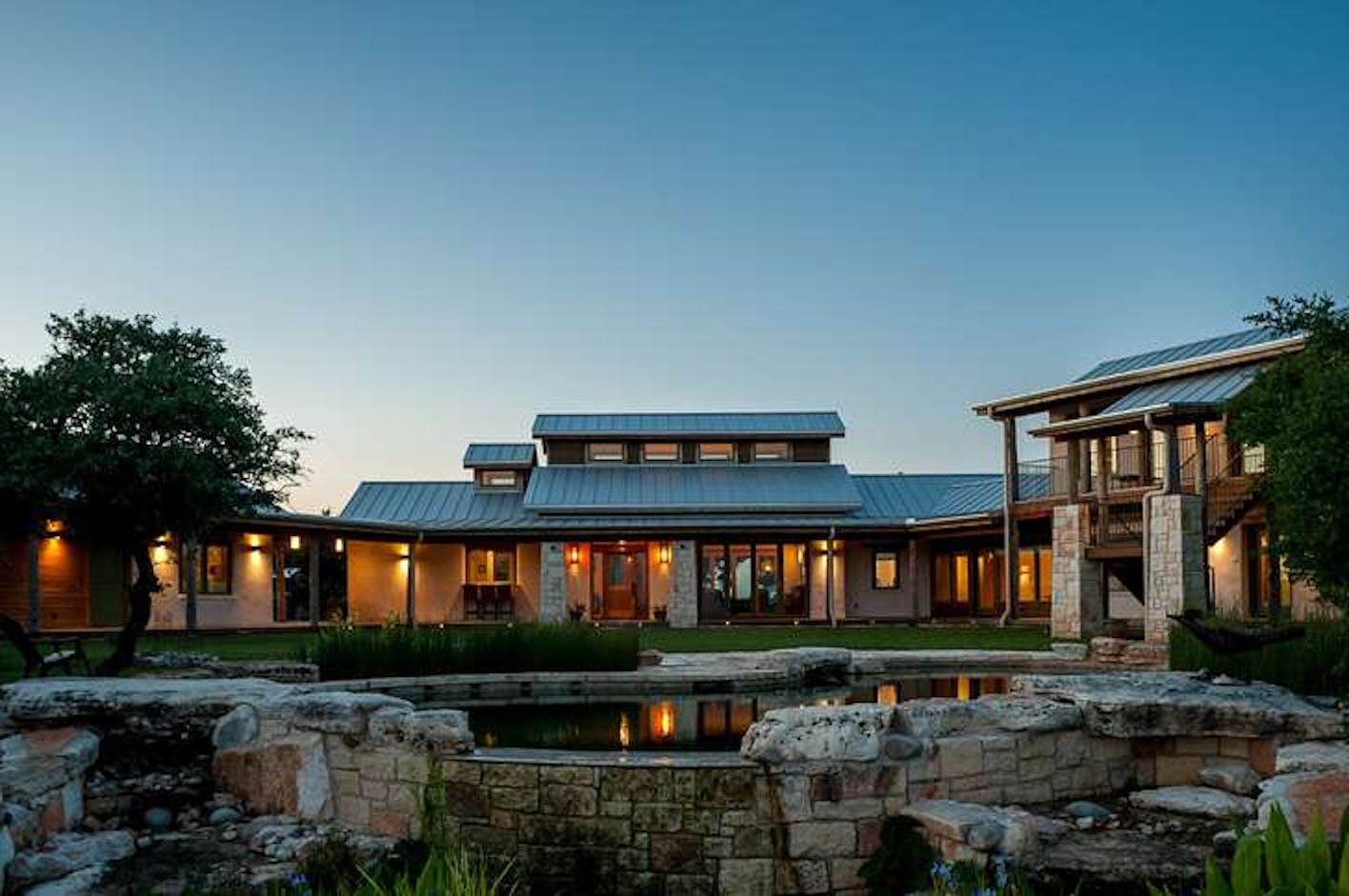 Becky Cavanaugh and Randy Seybold’s house near Dripping Springs took three years to build, but their patience is paying off in their electric bills. With some tinkering, they expect their compressed-earth block house and straw-bale guest house to become net-zero — meaning that it makes all the energy the family needs to use.

The home is one of 10 on the Cool House Tour from the Austin Energy Green Building program and the Texas Solar Energy Society, which is June 12.

Cavanaugh and architect Gayle Borst of Stewardship Inc. took us through some of the sustainable features of this property, which was built by Cox Construction. 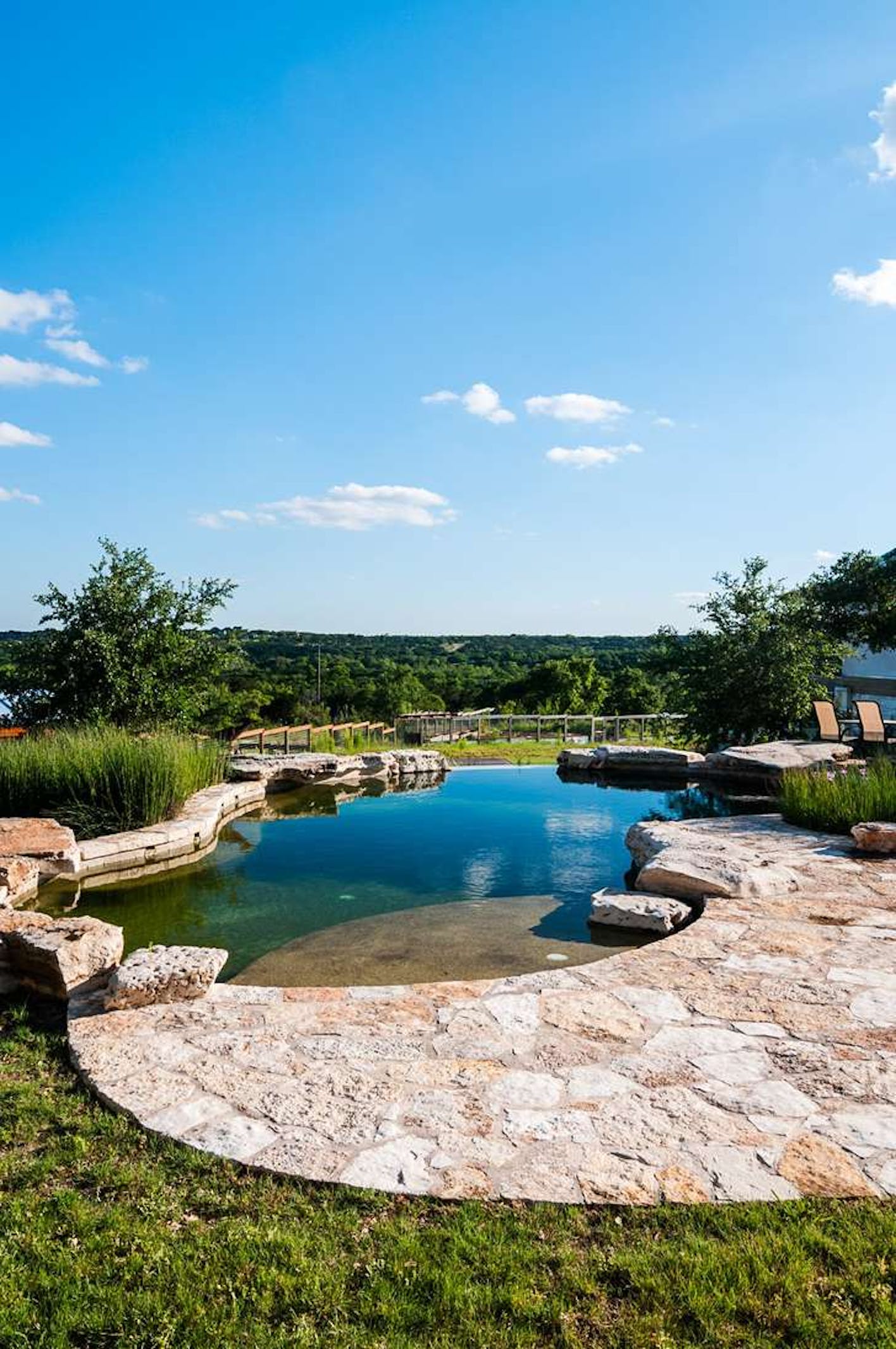 When Cavanaugh and Seybold bought the property, previous owners had taken out all the cedar, which left nothing to hold the topsoil in its place. Instead, it all washed away, leaving the limestone rock and little else. By bringing in dirt and planting native grasses, the couple is restoring the land.

In the portion of the land that serves as the lawn, they used Habiturf from the Wildflower Center and created a biofiltration irrigation system that turns water discarded from sinks, laundry, toilets and showers into water for the turf.

Borst has worked with many earthen building techniques including straw bale and cob. For the main 2,936-square-foot house she chose compressed earth blocks for their stability. The blocks are made from a combination of soil with a high clay content, sand, and lime or Portland cement. The composition depends on the quality of the local soil.

Because of the condition of the land when Cavanaugh and Seybold bought the property, soil had to be brought in to make the blocks. The blocks were built on site and set out for three days to cure before they could be used. “It’s very labor-intensive,” Cavanaugh says to explain why it took three years to build.

The design of the house had to be predetermined including wiring and plumbing because of the solidness of the blocks. The blocks also limit some of what can be done with them. Large arches inside the house were built with traditional building techniques. However, most of the inside walls and all of the outside walls are compressed-earth blocks.

Cavanaugh and Seybold chose to cover the interior surfaces of the compressed blocks with local custom earthen plaster. The exterior is lime plaster. Both give the blocks a refined quality.

Around the windows, they chose cedar planks that are more rustically cut on the outside but more finished inside. They also chose to use limestone blocks as windowsills on the outside. “We like the rustic elements, but also the refined,” Cavanaugh says.

Borst added light to every room by making sure each room had a window. In the master closet, which is an interior room, a high window takes in light from the bathroom window across the way. Using natural light limits the amount of lighting needed, though all of the home’s lights are LED. 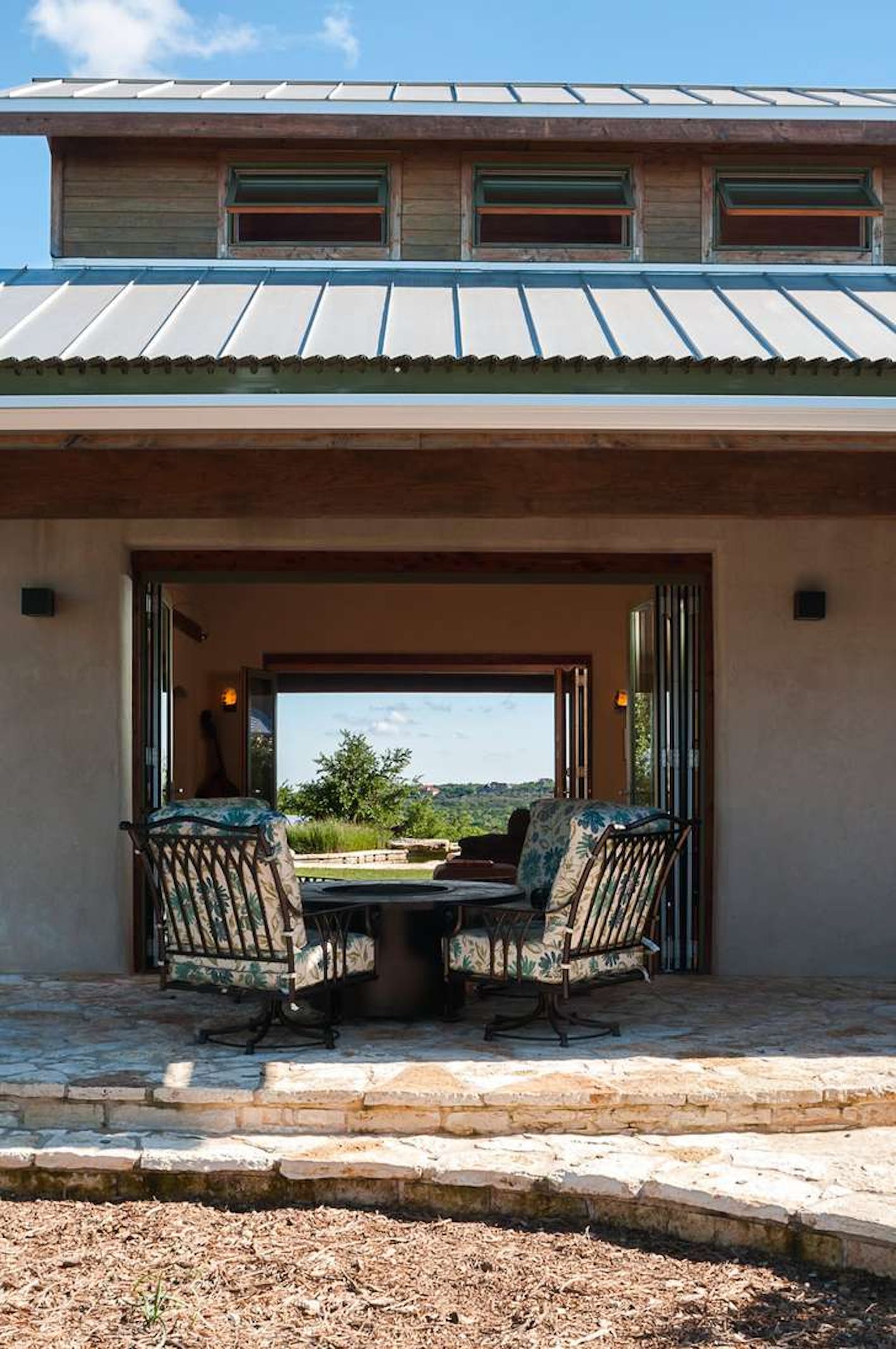 In the living room, two walls on either side open up using Nanawall floor-to-ceiling glass doors. These allow for cross-breeze ventilation on a beautiful day. The living room also has clerestory windows that open up, creating a place for heat to rise and then escape.

Two windows in the kitchen — one which opens to a serving counter for pool guests — can be opened up across from one another for cross breezes. 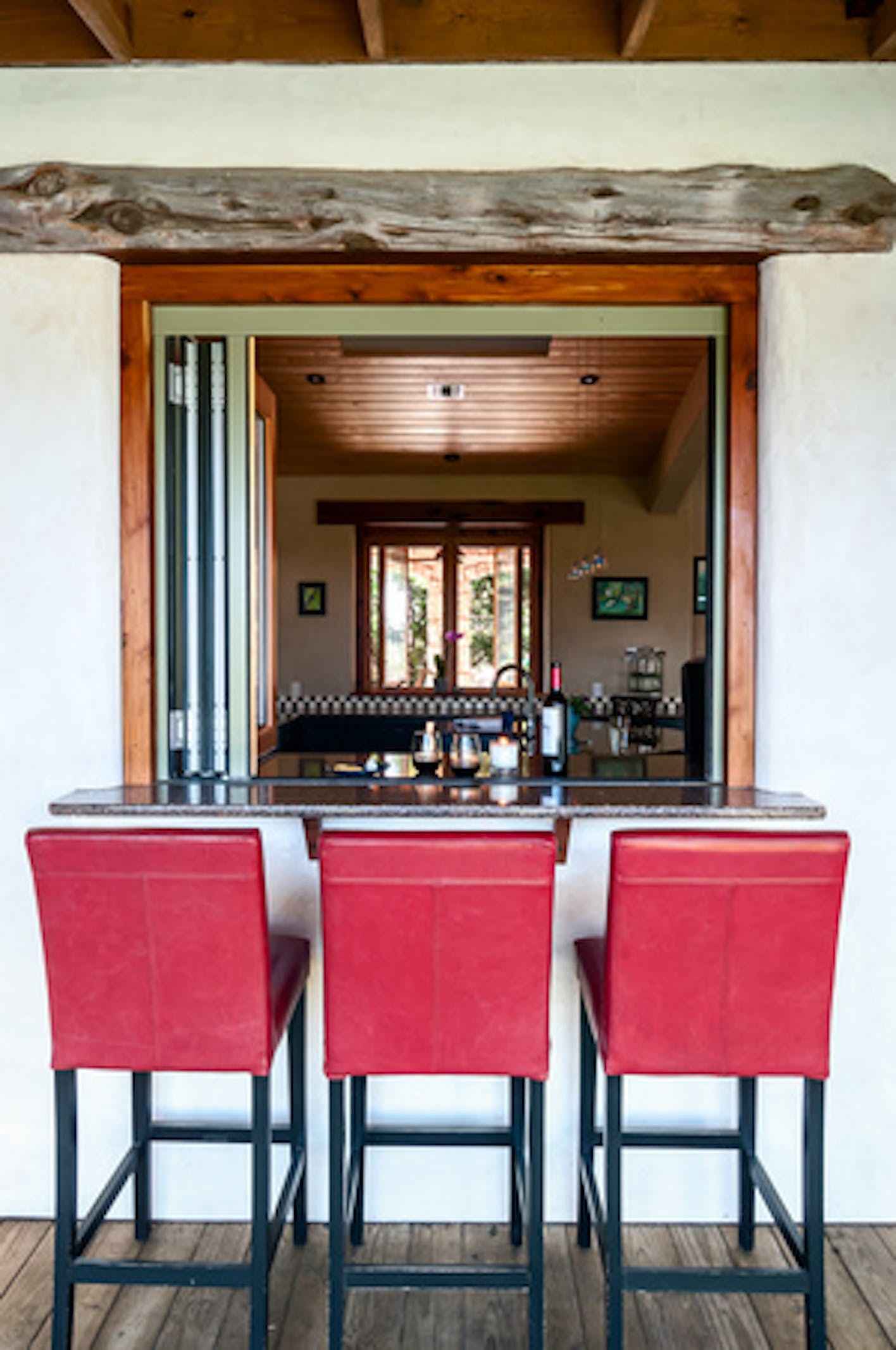 Throughout the house, the couple used pecan wood flooring reclaimed from Ivanhoe Lodge 15, once used by the Knights of Pythias in Palestine, Texas. In other places, such as the playroom and laundry room, cork floor, which is renewable, was chosen. Other rooms use stained concrete floor or tiles made from recycled materials.

The couple, along with their designer, Jana Denzer, went shopping for finishes at TreeHouse, a sustainable home improvement store. There they chose recycled counters and tiles from Silestone, Emil, Oceanside, Viva, Cosentino and Elements for the kitchens and bathrooms.

The master shower uses the ancient Moroccan Tadelakt plaster technique, which is a plaster made of lime that has no grout or seams and is easy to clean.

Cavanaugh and Seybold installed a 9 kW solar photovoltaic panel system and a solar thermal system and plan to add more panels after they figure out what their typical energy use will be. Creating an estimate of energy use was hard for them because they entertain guests often, and as the size of the household changes, so does the energy use.

They have smart thermostats and a mini-split system for heating and cooling. This allows them to only heat or cool the space they are using and not the guestrooms or other rooms they are not. They also have ceiling fans throughout to circulate air without using air conditioning.

The sun’s rays don’t overpower the interior of the house because the house is protected by large overhangs. Upstairs, the couple took advantage of the natural breezes that flow there by creating a large covered balcony for entertaining.

Putting rainwater to use

About 7,000 square feet of galvanized steel standing seam roof collects rainwater for the family. Rainwater is their only water source. They store it in a 30,000-gallon cistern used for the house and a 20,000-gallon cistern for the pool and gardens. They also can transfer water from cistern to cistern if needed.

Putting the land to work

Cavanaugh has established a food forest at the front end of the property with multiple beds of vegetables and herbs and pear, peach, apple, pecan and plum trees. She is using all organic, permaculture techniques. She is currently producing more than they can eat and sharing the wealth and canning for future use.

They also have chickens for eggs, fertilizer and insect control.

Instead of a chlorinated or saltwater pool, Cavanaugh and Seybold opted for a natural pool, which is filtered by three pond regeneration zones filled with plants that are natural filters. “It’s never going to be like a bright blue chlorine pool, but it’s like a natural pond; it’s heaven,” Cavanaugh says. That means tadpoles live there as well. In fact, the kids often like to play in the regeneration zones where those critters like to hang out as much as they like play in the pool.

The 575-square-foot guest house had to sit on top of a garage area and also would be unprotected from the elements including wind and sun. Compressed-earth blocks would have been too heavy for the structure underneath to support. For those reasons, Borst chose straw-bale construction. Bales of straw are stacked and then tied together. Then are plastered over to create finished walls.